Cast iron is great for cooking, especially for adding flavor to meats. However one common issue people have is their cast iron is sticky after seasoning it.

The main cause of cast iron pans having sticky seasoning is due to incorrectly seasoning it in the first place.

To avoid sticky cast iron, you need to prepare the seasoning and heat it properly.

When it comes to applying oil to season the pan, you need to ensure you use enough oil. If you don’t use enough then you are going to end up with dry spots where there is no seasoning, and it’s going to be pretty uneven. This is going to lead to sticky cast iron when cooking food.

If you struggle with knowing how much to use, always be generous with it. Which leads me onto the next issue.

Using too much oil can also lead to your cast iron pan sticking. When you apply too much oil and try to cook it, the excess oil won’t absorb enough oxygen to create a seal. This will ultimately lead to a cast iron pan with a sticky residue on it.

If you have used too much oil then don’t worry, just use a paper towel to wipe around the pan and this should soak up any excess oil.

Using the wrong oil can wreak havoc on your seasoning process. If you use one with a high smoking point, then you are going to need a very efficient heat source to cause the oil to bond with the surface.

Flaxseed oil is one of the favorites for seasoning cast iron cookware because it has a very low smoke point. It’s at only 225 degrees Fahrenheit , but that’s not where the good stuff stops.

When flaxseed oil heats up, it creates a polymer that bonds well with the surface of the pan. It’s durable and long-lasting – almost comparable to the stuff that would come out of the factory.

This oil is our top pick. And since you don’t have to use the cold-pressed and unrefined stuff for this task, it’s also quite affordable.

If you use too much heat, this can cause the oils to react too much, causing a layer of seasoning that has not properly polymerised.

Cooking the oil long enough is essential when seasoning your cast iron to avoid a stick coating. We usually bake our cast iron for an hour at a time, and then letting it cool down for an hour before applying the next layer.

This gives the oils enough time to create a bond to the surface, regardless of which oil you use. If you don’t leave it in the oven long enough, you will just end up with half bonded oil where some is bonded and the other parts are still sticky.

Preheating your oven is essential to avoid stickiness after the cast iron seasoning process. If you don’t preheat your oven first, then you don’t give the oil a chance to bond to the surface, it will most likely run off the pan before having the chance to bond.

Ensure the oven is preheated to the temperature just above the oil’s smoking point, this will make sure it is hot enough for the oil to bond to the cast iron pan.

7) You didn’t turn your pan upside down

Turning your cast iron pan upside down is essential to getting the seasoning process right. You cannot skip this step.

How to remove old sticky grease from cast iron skillet

To remove old sticky grease from a cast iron skillet, you realistically need two things. A self cleaning oven, and some dish soap.

Don’t worry if you don’t have a self cleaning oven, because you can just use dish soap or a dishwasher, it will just take more effort to clean that’s all.

So, if you have a self cleaning oven, place your cast iron skillet upside down in it, and start the cycle. This should take roughly a few hours. The self cleaning oven will heat up to around 500 degrees Celsius and essentially burn through any layer of oil on the pan.

The other way is to mix some warm water with dish soap, and submerge the cast iron pan fully. Leave it for around an hour and then start scrubbing away with a brush or sponge. This should clean any layer of seasoning straight off.

About Me
Welcome to Kitchenoa. My names Janette and cooking is something I've had a passion for since the day I was born. I decided to create this website to provide educational articles about cooking equipment. I hope you enjoy and learn something new! 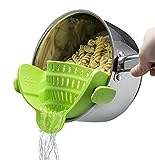 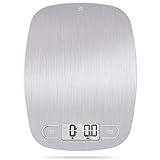 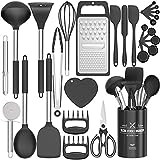