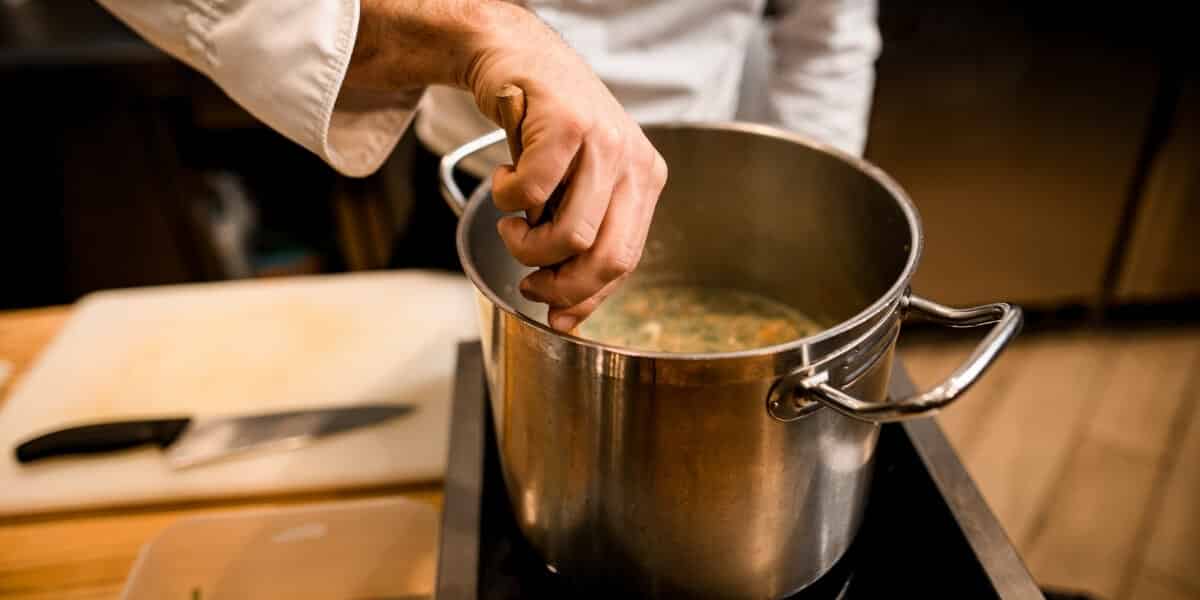 When it comes to a Dutch oven vs stock pot, they are very similar, in-fact they are so similar, that they tend to get used interchangeably. However, when you look at them in-depth, they do have some differences, and it’s really useful to know the differences so you know which one will suit your specific scenario the best.

Keep reading to find out the similarities and differences that Dutch ovens and stock pots have with each over.

What is a Dutch oven?

A dutch oven is a heavy duty cooking pot, it’s typically made from cast iron but you can also find them in enameled cast iron, it has a wide base with short thick walls, a tight fitting lid and it’s an oval shape. It’s great at certain cooking techniques like caramelizing, browning, braising or even simmering. Lastly, dutch ovens are famous for being used at campfires due to their ability to tolerate direct heat from the flames.

How are dutch ovens different than a stock pot?

A dutch oven may look similar to a stock pot, but they are very different, and if you get a stock pot when you realistically need a dutch oven, you will be in for a big dissapointment.

Keep reading to find out the major differences between a dutch oven and a stock pot.

The first major difference is the material they are made out of, dutch ovens are typically made out of cast iron, or enameled cast iron whilst most stock pots are stainless steel stock pots. The reason for this is because a cast iron dutch oven can be used on very high heat, such as campfire cooking or in the oven, where as stock pots were designed to be used in doors on stoves, so they don’t require the heat tolerance of cast iron. And because stock pots are moved around much more than dutch ovens, they need to be lighter to make cooking easier which is why they are made from stainless steel.

One last note on this, an enameled dutch oven cannot tolerate the same heat as a plain cast iron dutch oven, so if you are looking to cook on high temperatures, then it’s best to avoid the enamel coating on your dutch oven.

Dutch ovens are much heavier than stock pots

The next point is related to the material, and that’s the weight. Because dutch ovens are made from cast iron, they are very heavy, especially when filled with food. And when I say heavy, I mean really heavy, roughly about 11 pounds without any food in. Whilst stock pots are very light due to being stainless steel, they roughly weight around 4-5 pounds depending on which one you buy, making them much easier to handle in the kitchen.

Dutch ovens require seasoning and stock pots do not

Like all cast iron, when it comes to dutch ovens, you need seasoned cast iron, yep you need to season your cast iron dutch oven if it doesn’t have an enamel coating. The reason being is because cast iron will naturally cause food to stick, the seasoning provides a smooth protective barrier around the cast iron causing which is naturally non stick, it will also protect your cast iron from the moisture in the environment preventing it from rusting.

And because stock pots are made from stainless steel, they do not require seasoning as they naturally have a non stick finish.

Dutch ovens have a different shape than stock pots

A stock pot on the other hand is circular with straight sides and it’s taller with a loose fitting lid. The tallness allows the stock pot to cook large quantities of food without taking up to much space on the stove, which is perfect when you need it on a simmer whilst cooking other foods in pans. The loose fitting lid allows the steam to escape which helps a lot with reducing sauces and foods that you don’t want too moist like rice.

Dutch ovens are basically braising tools, because it’s a large dutch oven, you can fit both sauces and meats inside for braising, and meats need moisture. Because dutch ovens are large with a tight lid, they can handle a lot of sauce for the meat, and also help baste it by trapping the steam inside. These two traits don’t just allow for braising, but anything that tastes better in general that’s moist, for example chilli because it contains beef, and dried out beef in chilli is not ideal.

Dutch ovens are more difficult to store than stock pots

A stock pot is much easier to store, because they are stackable, and light weight, and stainless steel doesn’t chip. So regardless of the size of your kitchen, stock pots will always be storable.

What is a stock pot?

What are the similarities between dutch ovens and stock pots?

You’ve probably already noticed that Dutch ovens and stock pots look alike, and that can only mean one thing, they have similarities, so what are they?

They both can cook large quantities of food

Well the main similarity is, they can both cook large quantities. So if you like meal prep, or you simply like to save money by cooking in bulk, then either a Dutch oven or a stock pot will be the perfect purchase for you.

They are both great for slow cooking

They are both made from metals

Next up is the material, both stock pots and Dutch ovens are made from metals, so you won’t be seeing any non stick or ceramic types of them.

They can be used interchangeably

And the final similarity is, they both can be used interchangeably, there are some differences with the cooking process that can result in slightly different results, but there’s nothing I can cook in a stock pot that I can’t cook in a Dutch oven.