It’s frustrating isn’t it, you turn your tap on, only to see brown water coming right out of it. Your first thought is, how do I get rid of brown well water? Well interestingly enough it might not even be coming from your well.

There are four reasons you have brown well water, either rust, iron, tannins, or silt. If it’s rust, then it’s coming from your pipes and not your well water, but the rest of the causes are because of well water.

This article will cover exactly how to get rid of brown well water as easy as possible. 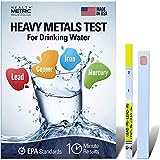 Identify the cause of brown well water

The first thing you need to do to get rid of brown well water is finding the cause. Without reason, you won’t know the fix.

Read through the four different causes and how to test for them below.

Iron is a common cause of brown well water. Not only will iron ore turn your water brown, but it will stain your fixtures and turn your clothing brown, too, so it’s essential to fix it the issue as soon as possible.

Test for iron in your water by using this test kit.

Rust is a common cause of brown water but sometimes gets confused with iron; however, it’s not the well-water causing the issue when it comes to rust.

The inside of your pipes that run throughout your house could be rusty; ultimately, this leaves it falling into your water, causing it to turn brown.

The best way to check for this would be to try other taps in your house, as it’s doubtful that all your pipes will be affected.

Plants, seeds, bark, wood, leaves, and fruit skins typically contain tannins. When it rains, and theirs any prior on the ground, the water will run through them, taking tannins with it. These tannins then find their way into your aquifer, which turns your well water brown.

To test if tannins are the problem, rake the leaves outside your house and any other plant-based debris, wait until it rains, and see if the well water is still brown. If your water stays clear, tannins are the issue.

Dissolved solids are called silt. These can find their way to your well water. Depending on the composition of the deposit, this could be turning your well-water brown; in addition to this, depending on the sediment composition, this could cause health problems and cause pump failures, so it’s essential to fix the issue if you have one.

To tell if sediment is in your water, let the water from the house tap rest in a glass for a few hours; any deposit will fall to the bottom of the glass.

Fixing the cause of brown well water

However, you can also use some of the following methods to remove iron and get rid of brown well water.

To remove tannins it’s very tricky, and there is no guaranteed solution.

However, the first thing to try is to keep raking your leaves and plant debris outside your house; if you can keep up and keep the water clear, then perfect.

However, some tannins will still find their way into the aquifer.

To thoroughly remove Tannins, you will need to invest in an Ion exchange system, reverse osmosis system, or an oxidation system. You will also require someone to do the plumbing; for more information, check out this page.

Silt typically enters the well water through ground disturbances, and it can be easy to remove from your water supply.

Because silt sinks to the bottom of the water, the cause of it being in your water could be that the water table has lowered and your pump is now too low.

If your pump is too low, it will be sucking up the sediment resting at the bottom of your well water.

The fix? Move the pump higher.

You can also get a filtration water system with well drilling if the pump is not the cause to filter out any sediments that the pump may have sucked up. This will leave your house with clear water.

To get rid of rust, it’s pretty simple, but it sometimes gets confused with iron.

You need first to identify which pipes contain the rust, simply by seeing which taps are releasing brown water and then following the lines.

Once you have found the pipes that contain rust, you need to replace them, preferably by getting a plumber in to do the job.

After replacing the pipes, you should have clear water again.