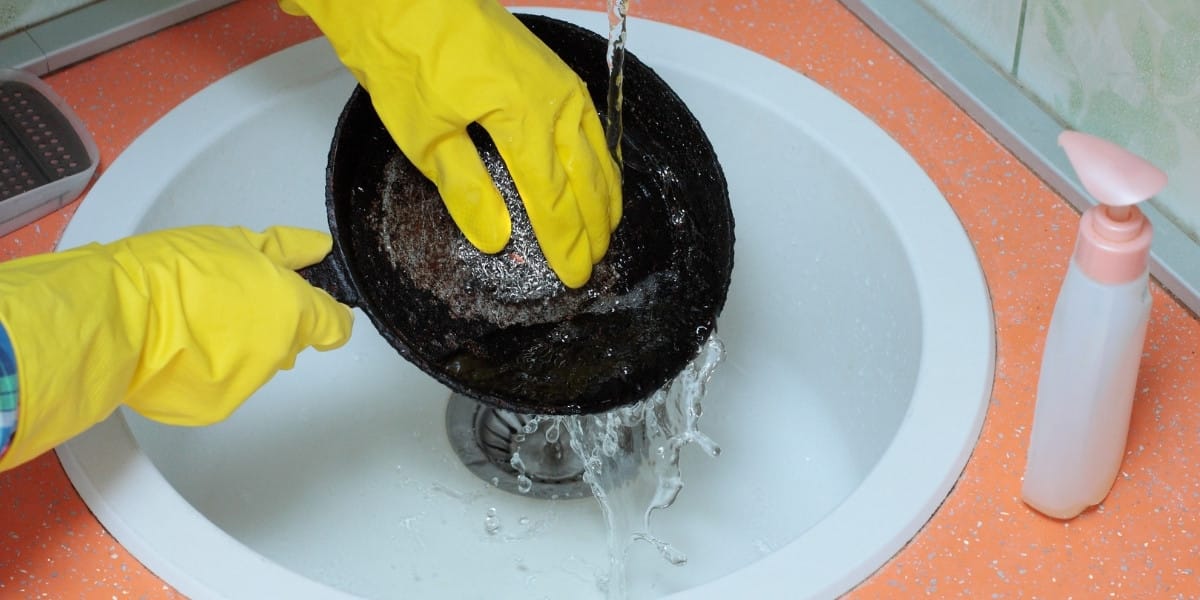 Achieving a clean, seasoned cast iron pan can be daunting. Those stubborn bits of seasoning just seem to never want to come off! But it’s a worthwhile task. The payoff is having a smooth, shiny surface that’s easy to clean and won’t rust.

Clean the pan with salt and lemon juice

The first thing you’ll need to do, is prepare your cast iron pan for stripping, to do this youll want to use something acidic like lemon juice, and salt. The acidic juice will help break down anything that’s stuck to the pan and the salt will act as an abrasive.

Simply add the acidic juice to the pan, and scrub it with a sponge and some salt. After you’ve removed all the bits of food stuck to the pan, rinse it, and then dry it.

Spray the pan with easy off oven cleaner

Next you’ll want to take your cast iron pan outside to strip it with oven cleaner, because oven cleaner should not be inhaled, and you don’t want to get it on any furniture as it’s very potent.

I recommend laying the pan on some old news paper, and then start spraying easy off oven cleaner all over it, making sure you cover every bit that’s seasoned.

Next, you’ll want to place the cast iron pan into a heavy duty sealable bag, now spray the entire can over it whilst it’s in the bag.

Leave it to soak for 24 hours

Now that your cast iron pan is covered in oven cleaner, you’ll need to let it soak for 24 hours to let the oven cleaner strip the seasoning off it.

After the 24 hours are up, you’ll want to take the cast iron pan out of the bag, and place it on some news paper, remember to use your rubber gloves to protect yourself from the oven cleaner!

Scrub with steel wool or a strong abrasive

Now your cast iron pan is on some news paper with a wekaned seasoning, it’s time to finally strip the entire coating off.

Get your steel wool or scouring pad, and start putting some elbow grease in to scrub the seasoning off, the more effort you put into this step, the better the result, so don’t get lazy!

Once you’ve scrubbed the seasoning off, you should be left with a rough cast iron surface and not a smooth plasticky like surface. After you have confirmed that the seasoning has been stripped, rinse it under a tap to get all the oven cleaner off.

Clean it again with salt and lemon juice

After rinsing your cast iron pan, it’s time for one last scrub with lemon juice and salt, this is to get any dirt or dust out of the impurities of the cast iron, this will allow the new seasoning that you are about to apply to stick well to the cast iron.

Now that your cast iron pan has been stripped down to the bare metal, it’s time to reseason it.

I recommend using a mixture of equal parts of canola oil and flax seed oil, as they are both natural oils and won’t break down at high temperatures.

Simply scrub this mixture into the entire cast iron pan, then place the cast iron pan upside down in the oven at a temperature higher than the smoking point of the cooking oil. See our full guide on how to season cast iron.

Can you scrape seasoning off cast iron?

You can simply scrape seasoning off cast iron, but it’s going to take a long long time, and it’s difficult.

There is a lot of debate about whether or not you can remove cast iron seasoning with vinegar. Some people claim that using vinegar can strip off your seasoning, other claim you can’t.

I claim you can’t. I have tried stripping it with vinegar before, and it’s simply not potent enough, especially when you have a strong layer of seasoning.

But if you have a weak layer of seasoning due to improper seasoning, then it may be possible.

The best way to remove cast iron seasoning, is to use an oven cleaner, followed by lemon juice and salt.